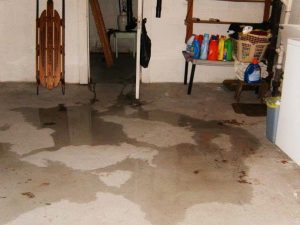 Do You Have a Wet Basement?

If you are noticing any kind of basement water seepage, your foundation has already entered into an advanced stage of disrepair. Serious structural problems such as bowing and buckling of the foundation walls and floor are more likely to occur. You may also begin to notice mold, mildew, musty orders, bugs and insects or even mud after a rainfall. Rust is also a common symptom of excess moisture in the basement. Rust may occur from water seeping into the foundation, but can also occur simply from excess moisture or dampness present in the air due to insufficient moisture control. Having a wet basement can also cause problems such as dry rot. Dry rot affects the walls, baseboards, joists, floor or the bottom of a wood staircase and occurs when moisture comes in contact with wood for any length of time. This is due to excess moisture entering the foundation through your walls and floor. Dry rot fungus is also a major health concern.

Sterling Heights was incorporated as a city in 1968. It was until the 1950s an agricultural area largely devoted to growing rhubarb and other crops sold in Detroit. During the mid 1950s, booming manufacturers looked for new opportunities outside of the City of Detroit and ultimately chose the rural lands of Sterling Township to call home. The Ford Motor Company, Chrysler Corporation, LTV Missile Plant and Briggs Manufacturing all followed the “Golden Corridor” up Van Dyke and Mound Roads and settled into Sterling Township–an area full of promise. With the tremendous industrial growth, plant workers followed the move to Sterling Township and left Hamtramck, Detroit, Warren and other southern Macomb County cities. “Dream Communities” complete with plans for rail transportation and upscale housing helped entice these modern settlers to move into Sterling Township’s state-of-the-art subdivisions, such as Dresden Village. With the boom, however, residents and township officials stumbled into massive flooding due to the lack of drainage systems, compounded in some areas by a major drain running into the township from the City of Troy. During this period of tremendous growth, neighboring communities, as well as a number of residents threatening to declare their neighborhoods a separate community, made attempts to seize land from the township. In 1960, a proposal to incorporate a portion of Sterling with Clinton and Harrison Townships went before the voters. Proponents for incorporating the three communities into the City of Moravian Hills faced a tough battle when opposing residents formed S.T.O.M.P., “Sterling Township Opposes Moravian Proposal.” The proposal was soundly defeated. A similar attempt to incorporate a portion of Sterling Township with the City of Warren met the same fate in 1962. Undaunted by these failed attempts, many residents were still convinced that the township needed to become a city if it was to maintain its identity and develop in a well-planned manner. Prior to 1968 Sterling Heights was known as Sterling Township. It had from 1836 until 1838 been known as Jefferson Township. Dobry Road on the northern city limits is named after the last township supervisor, Anthony Dobry, who was also the second mayor. Gerald Donovan became the first mayor of the city. F. James Dunlop became the first mayor pro-tem. There was already a small village named Sterling in Arenac County, so the word “Heights” was added to the township name to satisfy a state law that prevents incorporated municipalities from having the same name. “Moravian” was another name under consideration for the new city. Lakeside Mall opened in Sterling Heights in 1976. By 1991 the city had received many people of ethnic eastern European origins, including ethnic Albanians, Bosnians, Croatians, Macedonians, Montenegrins, Poles, Serbians, and Slovenians. They moved from Detroit and Hamtramck. As of 1991 many residents worked in automobile plants operated by Chrysler and Ford, and that year, Murray Dublin of The Baltimore Sun described Sterling Heights as “blue-collar.” As of the census of 2010, there were 129,699 people, 49,451 households, and 34,515 families living in the city. The population density was 3,552.4 inhabitants per square mile (1,371.6/km2). There were 52,190 housing units at an average density of 1,429.5 per square mile (551.9/km2). The racial makeup of the city was 85.1% White, 5.2% African American, 0.2% Native American, 6.7% Asian, 0.5% from other races, and 2.2% from two or more races. Hispanic or Latino of any race were 1.9% of the population. There were 49,451 households of which 31.0% had children under the age of 18 living with them, 55.0% were married couples living together, 10.5% had a female householder with no husband present, 4.3% had a male householder with no wife present, and 30.2% were non-families. 26.5% of all households were made up of individuals and 10.7% had someone living alone who was 65 years of age or older. The average household size was 2.61 and the average family size was 3.20. The median age in the city was 40.4 years. 21.7% of residents were under the age of 18; 8.8% were between the ages of 18 and 24; 25.8% were from 25 to 44; 28.6% were from 45 to 64; and 15.2% were 65 years of age or older. The gender makeup of the city was 48.5% male and 51.5% female.