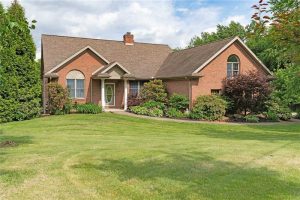 Once known as the Huron River (the original Indian name of the river was Natawasippee), the Clinton river received its current name back on July 17, 1824, as locals renamed the waterway in honor of New York’s governor, DeWitt Clinton. Area pioneers hunted the abundant game in the lush forests along the river and had no problems catching fish in its clear, fast-running waters. The 1882 edition of the History of Macomb outlined the river by stating: “The Huron (Clinton) River enters the town at the headwaters of the hydraulic canal in the Village of Utica, flows through a tortuous channel southeast and leaves the (Sterling) township. The soil is very productive, generally level and carefully cultivated.” Farmers took advantage of the area’s rich soil and built large homesteads, harvesting crops of wheat and corn on 100-acre farms. Apple and peach orchards dotted the landscape, and by 1832, more than 2,500 sheep and 1,200 cows grazed on rich grasslands, in addition to more than 500 horses used to work the fields.

As it had during the population boom of the 1950s, Sterling Township welcomed a great many residents from the City of Detroit after the War of 1812. A man by the name of Lewis Drake, born in New York and a direct descendant of famed 16th-century navigator Sir Francis Drake, came to the area now known as Sterling Heights in 1832 and bought government land at the price of 18 shillings (less than $4) an acre. His farm was located in the area of Dodge Park and Utica Roads. His farm was located in the Northwest section 14, East of Clinton River along the River Road. By 1880, Sterling Township was a prosperous rural area of neat farm homes and fields of wheat, corn and other crops. Sterling Township’s population was estimated at 2,088.

Before Detroit introduced the first “horseless carriages,” the “iron horse” made its way through the farming community of Sterling Township. The Romeo and Utica Stage Line met all passenger trains of the Detroit and Bay City Railroad at the Utica Depot, located just south of what is now Auburn Road in Utica. Trains passed through Sterling Township four times a day. Today, Sterling Heights is considered an integral part of the greater Detroit Metropolitan area. However, back in 1900, the trek from Sterling Township to Detroit was a half-day horseback trip on a rough clay Van Dyke road. Residents relied on Utica Road, a planked toll street, and the Clinton River to transport their goods to market.

Just as settlers of yesteryear depended on the Clinton for their livelihood, we as their descendants now rely on the historic river for serenity and recreation. The Clinton River park system has grown in popularity throughout the years, and now features several miles of trails and a number of relaxing picnic areas. The first American settlers in Mt. Clemens arrived as captives of the Chippewa Indians following the end of the Revolutionary War. After some escaped and others were freed by ransom payment from German missionaries, the settlers eventually built cabins along the Clinton River near Mt. Clemens, recognizing the rich natural resources the river and surrounding area possessed.