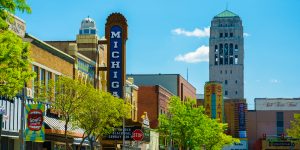 Cracks can form in foundations new and old, and commonly appear on your basement walls or floor. These cracks can vary in size depending on the amount of water pressure around the exterior of the foundation. It is common to see staining, moisture or dampness on the floor or walls after a heavy or saturating rainfall. In addition, you may have noticed some discolored, textured, musty build-up on your walls and floor. This mold and mildew build-up can appear in many different areas, and thrive in a moist, damp environment. Mold and mildew can cause serious health conditions such as as allergies, headaches, sinus problems, and asthma. Also, you may have the issue of dry rot. Dry rot affects the walls, baseboards, joists, floor or the bottom of a wooden staircase and occurs when moisture comes in contact with wood for any length of time. This is due to excess moisture entering the foundation through your walls and floor. Dry rot fungus is also a major health concern. Finally, If you are noticing any kind of basement water seepage, your foundation has already entered into an advanced stage of disrepair. Serious structural problems such as bowing and buckling of the foundation walls and floor are more likely to occur. You may also begin to notice mold, mildew, musty orders, bugs and insects or even mud after a rainfall. Everdry Michigan is proud to be a premier basement waterproofing, crawl space waterproofing and foundation repair company. Our services are permanent which is why we offer a Lifetime guarantee on most of our services. Everdry Michigan is an expert basement waterproofing company that can help you with basement leaks and flooding with our waterproofing services. We are happy to say we’ve helped many families repair their foundations and take back basements so they can enjoy their homes for a long time to come. Give us a call today so we can start helping you!

In January 1824, businessmen John Allen, originally from Virginia, and Elisha Rumsey of Connecticut met in Detroit. Only a month later, the two land speculators scoped out a 640-acre plot on the Huron River 40 miles (64.3 kilometers) west of the city and purchased it for only $800. By May, the village was fully registered as “Annarbour.” Whether it was named for their wives who were both called Ann or for another reason is still debated, but the new settlement soon became the seat of Washtenaw County. In 1837, Ann Arbor suffered both misfortune and success. It lobbied to become the capital of the new state of Michigan but lost out to Lansing; however, the land that had been set aside for the potential government buildings was instead chosen as the new site of the University of Michigan, which had been based in Detroit since its founding in 1817. Two years later, the town received another boost with the arrival of the Michigan Central Railroad, which helped to attract more and more settlers. In 1851, Ann Arbor was chartered as a city, and its population surpassed 5,000 by the time of the 1860 census. The city grew steadily from there until the 1940s when WWII necessitated the construction of a new aircraft manufacturing complex just outside of Ann Arbor. The plant, which produced the B-24 Liberator heavy bomber, brought many military personnel and workers to the city, and the population increased by over 60% that decade. Ann Arbor is best known as one of the top tourist destinations in the Midwest and a great place to live, with it being named one of America’s best small cities and one of the most liveable cities in the U.S. in recent years.

Ann Arbor’s “Tree Town” nickname stems from the dense forestation of its parks and residential areas. The city contains more than 50,000 trees along its streets and an equal number in parks. In recent years, the emerald ash borer has destroyed many of the city’s approximately 10,500 ash trees. The city contains 157 municipal parks ranging from small neighborhood green spots to large recreation areas. Several large city parks and a university park border sections of the Huron River. Fuller Recreation Area, near the University Hospital complex, contains sports fields, pedestrian and bike paths, and swimming pools. The Nichols Arboretum, owned by the University of Michigan, is a 123-acre (50 ha) arboretum that contains hundreds of plant and tree species. It is on the city’s east side, near the university’s Central Campus. Located across the Huron River just beyond the university’s North Campus is the university’s Matthaei Botanical Gardens, which contains 300 acres of gardens and a large tropical conservatory as well as a wildflower garden specializing in the vegetation of the southern Great Lakes Region. The Kerrytown Shops, Main Street Business District, the State Street Business District, and the South University Business District are commercial areas in downtown Ann Arbor. Three commercial areas south of downtown include the areas near I-94 and Ann Arbor-Saline Road, Briarwood Mall, and the South Industrial area. Other commercial areas include the Arborland/Washtenaw Avenue and Packard Road merchants on the east side, the Plymouth Road area in the northeast, and the Westgate/West Stadium areas on the west side.  Downtown contains a mix of 19th- and early-20th-century structures and modern-style buildings, as well as a farmers’ market in the Kerrytown district. The city’s commercial districts are composed mostly of two- to four-story structures, although downtown and the area near Briarwood Mall contain a small number of high-rise buildings. Ann Arbor’s residential neighborhoods contain architectural styles ranging from classic 19th- and early 20th-century designs to ranch-style houses. Among these homes are a number of kit houses built in the early 20th century. Contemporary-style houses are farther from the downtown district. Surrounding the University of Michigan campus are houses and apartment complexes occupied primarily by student renters. Tower Plaza, a 26-story condominium building located between the University of Michigan campus and downtown, is the tallest building in Ann Arbor. The 19th-century buildings and streetscape of the Old West Side neighborhood have been preserved virtually intact; in 1972, the district was listed on the National Register of Historic Places, and it is further protected by city ordinances and a nonprofit preservation group.