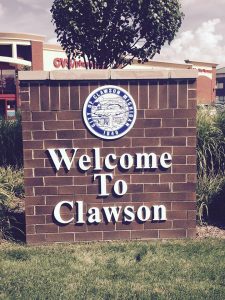 After the War of 1812, two million acres of bounty lands in Michigan were to be granted to the veterans of the war. The land surveyed in southeastern Michigan in 1815 was deemed unfit for habitation. Michigan was withdrawn from the veteran’s bounty, thus delaying settlement. In 1818, new surveys proved the first ones inaccurate and the land sales began. Oakland County, established in 1818, was original twice the size that it is today and was under the jurisdiction of Macomb County. With fewer than 60 families, it was organized as a separate county and Pontiac was selected as its county seat on March 28, 1820. The first settlers that came to the area now known as Clawson purchased land identified as sections 3 and 4 of Town 1, Range 11 East and sections 33 and 34 of Town 2, Range 11 East, Bloomfield Township. In 1827, Towns 1 and 2 became Troy Township. The town lines ran north from 8 Mile Road (Baseline) to South Boulevard and from Dequindre to Greenfield (in Royal Oak) and Adams in Troy. In 1832, Royal Oak separated from Troy and became Royal Oak Township. After 1832, those living north of the Townline Road (14 Mile) lived in Troy Township and people living south of Townline lived in Royal Oak Township. The little community growing around the four corners of today’s 14 Mile and Main Street lived in two separate townships and it remained that way until the village.  The first road was cut through in 1827 between the section lines. Now, it is Main Street—then it was Niles Road, named for Johnson Niles who lived in Troy at Square Lake and Main (his house still stands). In 1829, an Indian trail on a sand ridge was made a plank toll road named Paint Creek Trail; today it is Rochester Road. The road now known as 14 Mile was originally the Townline Road and was finished in 1874. Later, it was the Clawson Road. Small businesses and industries arrived with the roads. Two of the businesses were sawmills. In 1832, James G. Johnson dammed the Little Run Creek, a fork of the Red Run that ran through this land crossing Main Street near Chippewa. There, Johnson built the only water-driven sawmill in Royal Oak Township. On the Troy Township side of Clawson, near the northeast corner of 14 Mile and Main Street, another mill was built by Dewitt Williams and Lorenso Chillson in 1849. On August 16, 1880, the first post office in Clawson opened. Legend has it that it was to be named after Mr. John Lawson who was the first postmaster; however, he never held that postion. Another tale was that it was named after C. (Clyde) Lawson, which is impossible because Clyde Lawson was born in 1882! With the post office, Clawson finally had an official name. In 1899, the Interurban Railway came through Clawson. It traveled from Detroit, down Woodward, through Royal Oak on Main, continued on to South Boulevard, and turned east to Rochester Road, moving on into Rochester. The railroad changed Clawson as it did other communities in the country. Inexpensive fares gave residents an opportunity to work in Detroit and live where lots wer cheap and families could have large gardens, chickens, and perhaps a cow.

In the 1900’s, Clawson continued to change. More houses were built. Some were prefabricated that were bought from Sears, Roebuck and Co. or Montgomery Ward catalogs. Several of these houses are still in the city. In 1903, the Improvement Club, later called the Clawson Literary Society, organized. Their objective was “improvement in the community.” At first, they planted flowers around the railway station and found other ways to spruce up the town. In 1920, the club changed its name to the Clawson Woman’s Club. Today, it is known as the General Federation of Women’s Clubs Clawson and is the oldest civic operation in the city. Early in the 1900’s, developers began to subdivide Clawson. Mrs. Mary Mooney was one of the first to do so. She began to subdivide her land on the west side of North Main Street in 1913. In 1915, an acre of land (equal to 12 city lots) could be purchased from Eyster & Howarth Company for $125, or $5 a month. After World War I, there were repeated movements to incorporate, so the village would have its own local government. Residents were dissatisfied with the lack of utilities and other conveniences. Finally, after injunctions by Royal Oak and Troy Townships, a charter was voted upon and passed, and Governor Albert Sleeper approved it on May 29, 1920. The new village commission immediately began plans for a new sewer system in the village. The first sewers ran on Jefferson to Washington and also on John M. and Main to an open ditch on Broadacre. George Millard was deputized as night watchman by the Oakland County Sheriff. In 1922, the police department was organized, as well as the volunteer fire department. In 1927, the first village manager was hired.

There were more businesses and professional men in Clawson by the 1920’s. The village had one lawyer, two physicians, and one dentist, Dr. Tusison. David Cleary established a men’s clothing store and Clawson’s first newspaper, The Clawson Journal. Cleary was also postmaster, and in 1925, he was president of the village commission. By 1930, Clawson’s population was 3,377, a significant increase from 1920 when the census recorded a population of 1,000. However, the economic depression affected the village as it did the entire country. The village manager was ousted, and two days later, the Village Commission revised the budget and raised the tax rate. They also cut employees and services. In 1940, Clawson incorporated as a home rule city and after World War II, Clawson really began to grow. By 1949, 500 new homes were built. There were also two new factories and two new commercial buildings and a weekly newspaper. During the next decade, more homes, commercial buildings, schools, and churches were built to meet the needs of the residents. In the 1960’s, new municipal and school buildings and a post office were added. In the 1970’s, the population of Clawson declined and some schools were closed. However, the city built a new fire station, and a community activities center was attached to the Municipal Building. During the last two decades of the 20th century, there has been an effort through the Downtown Development Authority to revitalize the downtown area of the city. Several of the buildings date back to the 1920’s. Change is constant in any community and Clawson continues to develop as it has for the past 180 plus years.